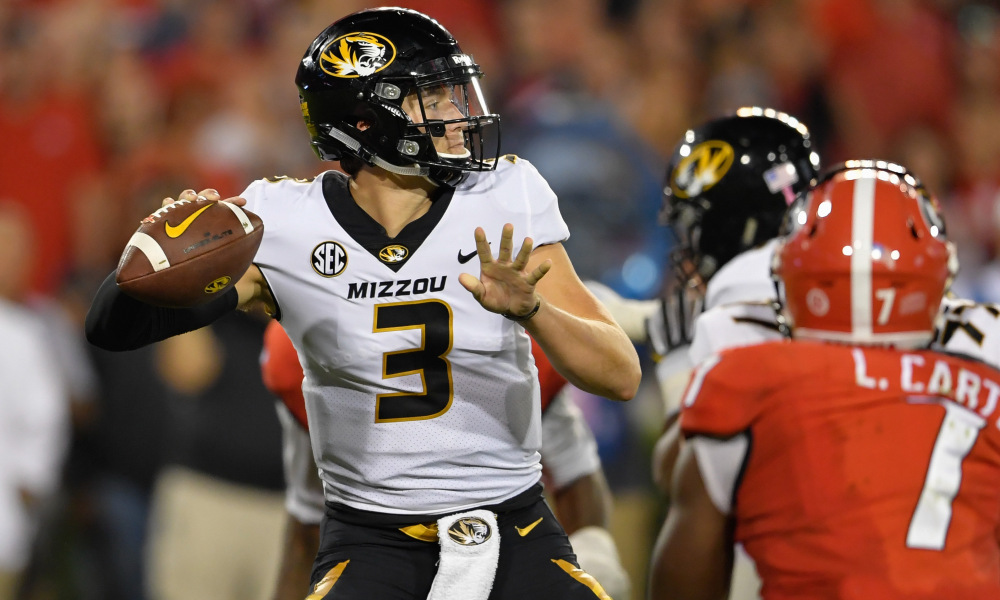 Drew Lock is going into the 2019 NFL draft touted as the top QB prospect in the nation. This says more about the QB class than his own ability though, as watching him does not give you the feeling he is the top guy. Lock does not have the same electricity that engulfed the Deshaun Watsons and Baker Mayfields of the world. He does not exude that IT factor that made Chicago jumps up at grab Mitchell Trubisky. He is for the most part, a rather generic gunslinger. He shows promise, and as much as others fall in love with his cannon for an arm, I believe his true selling point is his pocket presence. Pocket presence is not something that can be taught easily, and to have that radar already means he will not have to worry too much about learning to feel the rush coming. QBs who can throw the deep ball are a dime a dozen, but that skill in the pocket is what is really great about Lock. What is talked little in detail is also his mobility. While Lock will not outrun any defenders, he is not a sitting duck either. He a good amount of speed, and a resolve in throwing on the run that allows him to break from the pocket and sling the ball to the next open receiver when needed. He is a sideline-scrambler, meaning when he does scramble, he tends to head toward the sideline looking for a pass downfield rather than taking off with the ball. If no receiver is open, he has the head to get rid of it. This decision making is where Lock’s game begins to find its cracks though. Lock’s decision making and game management are inconsistent to his game’s level. He can throw the ball deep, he is accurate on the run, and he is smart enough to know when throwing the ball away is better than taking the sack. When he actually follows through is another matter entirely. Lock has a classic gunslinger mentality; He looks for the open man and will not hesitate to chuck the ball at the slightest hint of a playmaking opportunity. This has caused him to throw the deep ball on the run into double coverage when the smarter option would have been to hold it and pick up a handful of yards, or toss the ball out of bounds. This inconsistency and “live in the moment” attitude has burned Lock and Missouri in a few games. On top of this, Lock is simply not that good when faced with legitimate competition. Take a look at his statline from the 4 games against ranked opponents posted above and what do you see? Lock severely under-performs against hard competition. He threw abysmal-to-subpar in all the games minus Florida, and only had 1 TD against ranked opponents until the Florida game. If he cannot perform even to an adequate level against tough college competition, it makes his prospects against professional competition at the NFL level even harder to imagine in a positive light. The future does look bright for Lock though because of this fact; His biggest flaw is something that can be coached, and his decision making can improve with experience and maturity. I would not classify Lock as a draft breaking talent, and even the idea of taking him in the 1st round feels like a stretch to me unless the team is in absolute dire need of a QB.