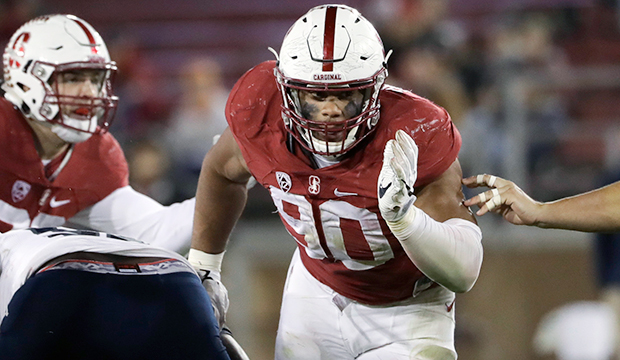 There is no getting around the fact Solomon Thomas is a disruptive force. Regardless of team, play style, or ideology, Thomas is a player that must be respected on the field at all times. His ability to disrupt the offense comes from his play style. Favoring a 4 point stance as opposed to the 3, Thomas shows excellent burst off the line at the start of the snap, and in some cases even gets behind the O Line before they even get out of their stances. His ability to find the ballcarrier on inside runs is deadly to offenses, and his constant assault on the pocket can disturb and even halt passing games. That being said, Thomas does have a major weakness that could sidetrack his superb college ability in the professional level: He is not a good inside rusher. This may seem bogus, after all, most of his highlights come from bursting through the A gap or right past the Guard for a sack or tackle in the backfield. But that does not show how often he is defeated when handling these spots on the field. Thomas is weak against the double team, and though he does show cases of overcoming the blocks and getting tackles, the vast majority of the time he is double teamed, he is completely removed from the play. This may seem strange to be pointed out for a DE, but Thomas came from a 3-4 defense, pushing him in to line up over the B gap. Even when the LBs were used for coverage, most of his play came from inside the offensive tackle. While he was great in this position for college, I do not feel he will be nearly as successful at the pro level. Another interesting point is the lack of NFL talent he has faced off against. Throughout his schedule, Thomas was only set to play against 3 O linemen who would also be qualifying for the draft: Damien Mama of USC, Shaun Harlow of Oregon State, and Caleb Peterson of North Carolina. He did not play a full game against either Mama or Peterson, and Harlow was moved to Center during their game, meaning he only really faced off against 2 NFL prospects. Even then, according to the NFL draft tracker, none of the mentioned linemen are even legitimate draft prospects. Mama is ranked 17th in the O linemen rankings, Harlow 38th, and Peterson 58th. the projected draft stock for all 3 is undrafted with less than a 50/50 shot of even making a roster. What this translates to is Thomas’s success as an inside DE may not translate to the professional level since he has not matched up against someone seen as an NFL caliber talent. His greatest asset going into the Draft is his ferocity; Thomas will play hard every down, every second of every game. Sometimes he was able to penetrate into the backfield just from wearing his opposition out. His greatest flaw is his shaky inside game, especially since the skill level of the inside linemen will skyrocket upon reaching the professional level. Despite this flaw, Thomas is a workhorse and easily could become a household name as a dominating defensive lineman. I see his stat line for his rookie season looking something similar to Jason Pierre-Paul.