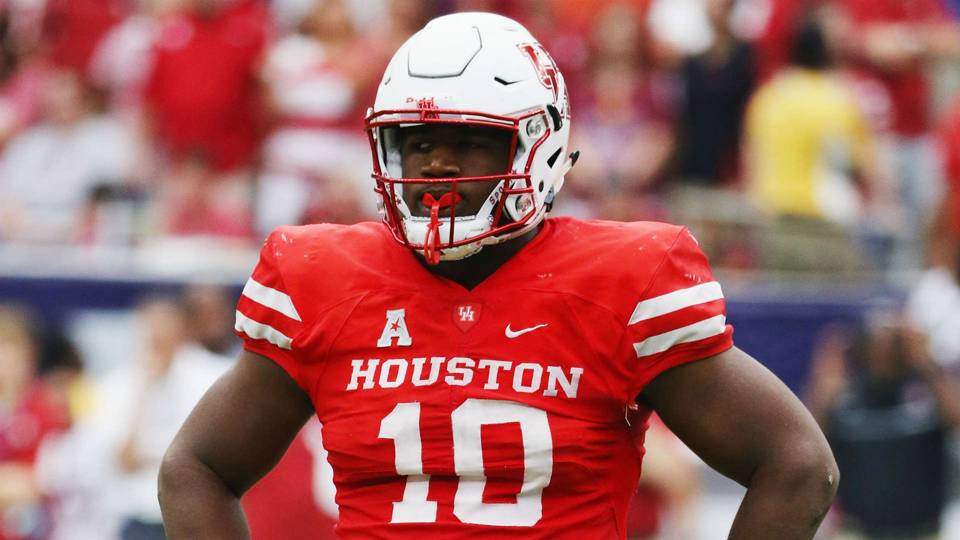 Oliver possesses a high level of brute strength that compliments his aggressive playstyle very well. He is the type of player that will constantly be a hindrance to the opposing offense. This is shown throughout his film be the sheer number of times he manages to get into the backfield. As I have mentioned earlier, his penetration rate with a sample size of 60 snaps over two games (@ Texas Tech and @Memphis) is an astounding 50%. The fact that he basically gets into the backfield every other play makes him a huge threat on that level alone. This sheer ferocity is the selling point of Oliver, and it is not too hard to see why so many have considered him a top talent in the draft. That being said, Oliver shows major flaws in his game that I feel may ultimately hinder his ability at the next level. The first is the yellow flag of him being high maintenance. I ran into this tidbit while researching his attitude for another scouting report and came across a portion of a Sports Illustrated article. In this, the writer claims that scouts have cautioned others about Oliver’s attitude, namely that he is a player that had everything handed to him. His conflict with Coach Applewhite during the Tulane game further promotes this point as he basically starts spewing anger over a coat. I will have the link to the story for those of you who wish to read it. Aside from this, his actual playstyle relies too heavily on his strength, as he basically lacks in everything else. He is not a good edge rusher, which limits his positioning. He is fairly slow off the snap, making him have to fight for good positioning on the play rather than getting that advantageous initial burst and putting the stress on the Oline to catch up. He lacks in variety when initiating contact. He has slow hands, and cannot keep blockers off him, making him fairly easy to initiate a block. He has slow feet which causes him to trip here and there, virtually eliminating him from the play. He has a stamina issue and sees a drastic drop in performance as the game goes on. On top of all of this comes his resume for the season. Oliver did not play a ranked opponent once during the season. His toughest opponent was Memphis, whose game deserves some respect, but that is no ranked foe. On top of this, he did not post high TFL’s, he has barely any sacks, and only one forced fumble on the entire season. This can be attributed to the fact that his presence has caused as much as triple teams to find and remove him from the play, but the question then becomes what does this look like at the NFL level? I doubt triple teams are going to be called in on him, and even double teams do not linger as long in the NFL. The overall statement for Oliver is that he is a physically dominating player, but I am unsure if he is capable of breaking these bad habits he has amassed over his time playing. He no doubt has the ability to be a starter on an NFL roster, but it remains to be seen if his game can improve so many issues when he must compete against the best.