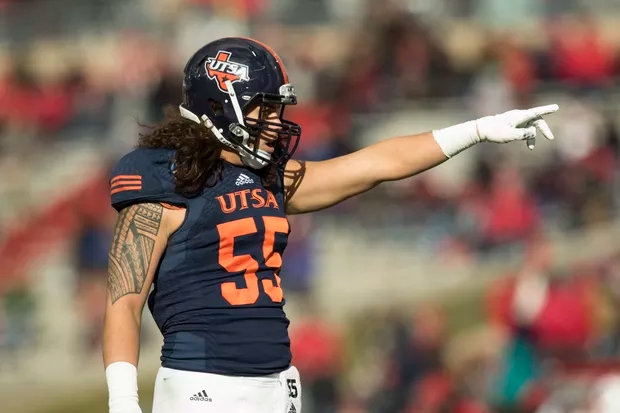 Tauaefa is rough around the edges, but overall is a player you look for in a defender. While his physical game leaves much to be desired, Tauaefa’s constant lurking and mental strive to make a play any how, any way on the field is a perfect fit for a majority of defenses at the professional level. Tauaefa does not possess any extraordinary ability to blitz, he does not have the most polished or guaranteed tackle, he does not possess that level of intimidation that elite defenders have. Yet despite all of this, Tauaefa consistently posts double digit tackles, finds himself at the center of congestion and somehow disrupting the play.

Tauaefa’s playstyle revolves around playing to flow. He is one of the first to jump on the chance to cut off any runners once a direction has been established, and has a surprising ability to stuff himself where the runner was attempting to go, often requiring the offense to bounce to the outside, or get stalled behind the line of scrimmage. Tauaefa also possesses a rather underrated ability to shed the tackle (as his shed rate can show). While a 42% shed rate may sound unappealing, take into account he plays Mike linebacker, which means a majority of his shed attempts came from rather unfavored conditions.To post a 73% contention rate despite this is a talent that can be built on and further developed. Tauaefa is also a player with a high motor that wastes no time or snaps when on the field. If you watch him during a game, you will notice he is never without something to do. He rarely if ever idles on the field, and his body language shows whether it be zone coverage, defending the run, or spying the QB, Tauaefa does nothing half-hearted.

This is not without two very glaring problems to his game. The first comes from his level of competition. Looking at UTSA’s schedule, the most prolific team they played on the year was a 7-6 Baylor team that had little trouble staying ahead to win the game. On a schedule with Rice, Marshall, Texas State, and UAB, it is easy for the majority to overlook Tauaefa. It is even easy to use it against him, after all, how would he fend against a legitimate conference like the SEC or even the Big 10? The second point is Tauaefa’s physical abilities. He does not show amazing level of strength, nor does his speed wow anyone watching. The most detrimental of all however, is his directional mobility. Tauaefa’s entire mobility on the field is at a subpar level. He does not possess high top speed, his acceleration is slow, he does not possess adequate chase down speed. He is slow to change direction, and his ability to cover large zones is nonexistent. The only good aspect of his mobility is his ability to crash down, and find the hole the runner is going for.

These two problems help build off each other. Would Tauaefa have been so dominant had he played against legitimate opposition? Would he have started had he needed to play against a pass-heavy conference like the Big XII? Would his strength or lack thereof be a hindrance to him had he been in the SEC?

Tauaefa was not a heavily sought after high school recruit, and even now, the NFL pre-draft rankings list him basically as a nobody: a project. I agree with is statement to an extent, but at the same time, I believe this is also why Tauaefa is so valuable. Athletes bulk up, they get stronger, they get smarter, but they cannot learn to be more tenacious. There is a mentality that goes into demanding to be respected on the field that few players have, especially as the college level. What Tauaefa lacks in physical ability, he makes up for in brute force diligence and resolve. Tauaefa as he is now will not crack the first 3 rounds, probably not even the 4th. But he is a project that can potentially span out into a foundational player on a team.